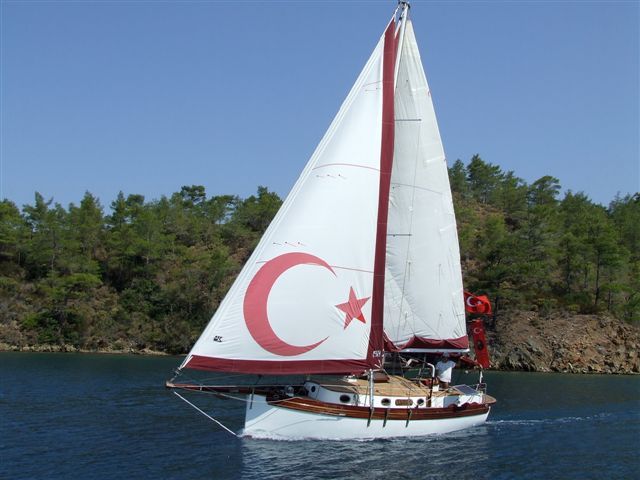 - A recent circumnavigation of the Globe in a sistership of TYD#936, single-handed by a citizen of Turkey, proved the merit of going small; going now, as they say. Kayitsis, her name, was also built in Turkey. 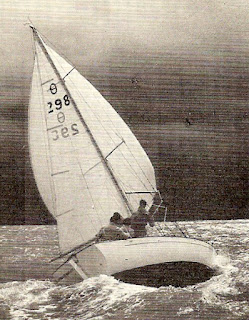 
- It has taken me almost 28 years to answer this question from a client: what about a small -pocketbook -vessel: seaworthy, trailerable, classic, and under 26'? As a matter of fact, what I had in mind was the first boat I ever designed professionally. At the time, employed by the very venerable firm of Illingworth and Primrose of Great Britain, John threw at me the job of designing a Quarter-Tonner for his own use. Bear in mind that I was just a kid, and the John in question was the formidable John Illingworth, master of "Myth of Malham," designer of "Outlaw" and a string of very successful racing boats in the era of R.O.R.C. rules. John was the apostle of the tall rig, cold- moulded construction, and the author of "Further Offshore".

- Well, I did not know much, but with the temerity of youth, the conscience of ignorance and the luck of innocence, I delivered a boat called "Merle of Malham". I have never been afraid of designing anything since. This became the last of the Malham's. Of course, I had the watchful eye of John Sharp, chief designer, looking over my shoulder pretty much the entire time, and I was nervously aware of his head shaking more than once over my labor. The result was quite all right. I believe eight boats have been built in a classic manner using wood carvel planking. As John later said of this boat, -Transom sterned, with a displacement of 3 tons, she was a very fine little yacht in which one would be quite prepared to set off across the Atlantic without and special preparation. (This is one question I ask myself when I do the sketch designs of a new small yacht). I saw one recently in St. Barths, French West Indies. It had four really good berths and a very good chart table. In the capable hands of her crew, she won a number of races in the season of 1967. 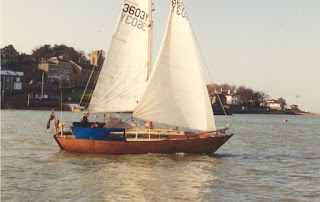 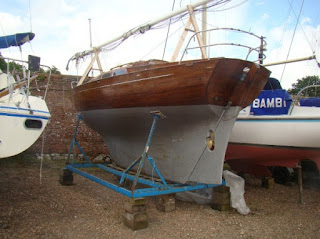 - I sent the plans of this design to a client for a look. His reply: -Too modern! -1967? Ok. Let's design instead of something he would be more comfortable with; a cold-moulded or stripped-plank version of a heavy Lyle Hess design rendered popular by the midget crew of Seraffyn. I say this because both John H and my customer are large men and the design had to be clever to accommodate their demands of space and comfort.

- Overall length was restricted to 25' 11-3/4". Why such a specific limit? the client figured that the boat would fit under his homeowner's insurance policy if under 26 feet! The overall beam was restricted at a little over eight feet to satisfy the highway department. Consequently, the hull sections show a roundish shape, accentuated by both the hull depth necessary to achieve the proper displacement and the full headroom under beams required by the customer.

- The waterlines forward are slightly hollowed to sharpen the plumb bow. The deck line shows a maximum beam carried all the way aft, almost resembling, in plan view, the shape of a Chris Craft. This, of course, was done to maximize the beam for space on deck and room inside a little different but it works nicely. The transom stern supports an outside rudder, well protected by a bumpkin and a skeg.

- The keel is separate from the rudder to reduce the overall volume of the hull and therefore her overall displacement. The lead is at the bottom of the fin for stability and the upper part of the fin is constructed of layers of wood. Numerous bolts attach the two together to the hull.

- The center of gravity for the boat is a few inches below the designed waterline. The D.W.L. at 25', the draft at 4'10" and the fully-loaded displacement under 10,000 Lbs. should move this classic, romantic, modern little ship at a good clip.

- The sail plan will help. The bowsprit was indispensable to spread the sail area on such a short hull. It is mostly used to set the Yankee jib as a reacher in light air. going to windward the (nearly) masthead staysail and its self-tacking boom will address 85% of the other situations, including the ability to go to the weather under staysail alone. The mainsail, as large as possible to fit within the aft triangle of the mast and the permanent backstay, is designed with a couple of reef points and a couple of full-length battens. Lazy jacks control the lowering of the sail. A boom gallow cradles the whole. A "Battcar System" is becoming almost a necessity these days and certainly a revelation to anyone who has not tried one yet. The cost is worth it.

- The mast has spreaders swept forward to control the fore and aft motion the spar, acting like a jumper, and keeping both sides of the rigging permanently taut by means of the permanent backstay. Chainplates attached outside of the hull increase the shroud angle, diminishing overall mast compression.

- The deck plan is straight forward, in a classic sense: with bulwark, Sampson post, dorade, skylight, horse traveler and protective coamings. A full-length cockpit discharges through the transom. Access locker and lazarettes complete the picture. The roofline is kept relatively low and features double sliding companionway hatches for access below. I feel that on a small boat where space is limited you will find that there is always someone in the way going up or down, crowding the ladder. Two companionways ought to solve the problem.

- The interior, of course, reflects the limited size of the vessel, but I think I did a good job of fulfilling the requirements.
Starting with a watertight bulkhead forward, the space aft is devoted to stowage and a chain locker. Further aft, you will find a toilet facing a workbench with a hanging locker behind. Close to full headroom for the shower will be appreciated in this area. A double door gives you entrance to the main salon. One of the settee berths is made a little smaller on one side to facilitate passage around the main mast A folding table is mounted on the spar. Water tankage port and starboard are fitted under the berths. The limited beam of the boat can allow shelves on either side.
The further aft, we have an icebox doubling as a navigation table. (The chart table can be raised independently of the cooler top).
On the opposite side, the compact galley has a stove and a sink with a couple of drawers thrown in. Food lockers complete the rest. A wet locker is adjacent to the starboard companionway, with a neat small folding table for food preparation in front.
A quarter berth is located on the port side, as much to serve as a convenient storage area and to separate the sleeping arrangements or the give the skipper or crew a handy berth near the deck.
The engine is exposed in this design by removing the aft panel. Originally a Sabb engine was proposed (and the room is there for it), but the difficulty in finding one made us go with the universal Yanmar stand-by.

- Along with the "Battcar System" mentioned previously, for me the other necessary piece of equipment in a boat like this is a feathering Max Propeller.
A fuel tank is placed against the watertight stern bulkhead.
All of these design details make for a seaworthy little ship with the advantage of being trailerable (albeit by removing a lot of boat gear and crew belongings as well as food, fuel, and water).
It can be seen in the construction plan of this sailboat that the scantlings and method of construction are just as adaptable for offshore work as it is for suffering the indignity of a bouncing trailer. The vessel is strip planked, edge nailed and glued, with the addition of internal frames, bilge stringers, and a floor system built to take severe groundings and shocks.

- Covered outside by fiberglass for abrasion resistance, she should be a tough little tomboy. An alternative method of construction could be of multiple cold-moulded layers laid on top of longitudinal stringers.

- This boat is not inexpensive to build for her size, but because of her dimension, she still represents an economy over most other sailboats. She very nicely offers an integrated package that includes most of what we would ever want on a passage.

Videos about Kayitsiz 111 can be seen on youtube.
https://www.kayitsiz.com
When there, open with:
https://youtu.be/gaF1RskelvM
and several others. 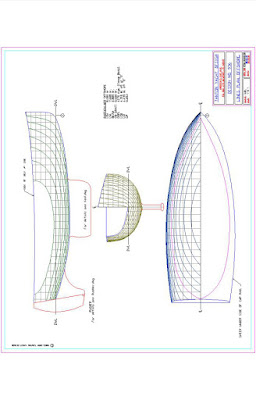 Posted by Tanton Yacht Designs at 11:54 AM