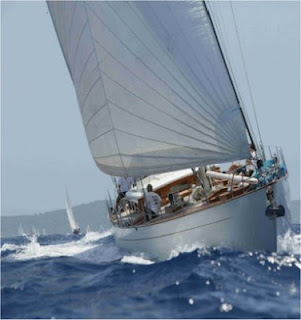 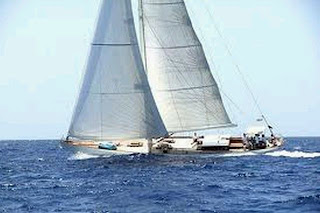 ﻿The end of the hurricane season is marked by the annual exodus to warmer sky. Boats of all kinds and sizes descent south. My son Chauncey jumped aboard "Aurelius", a Gerard Dijstra & Partners classic design for a quick 8 days delivery from Mamaroneck to St. Martin. 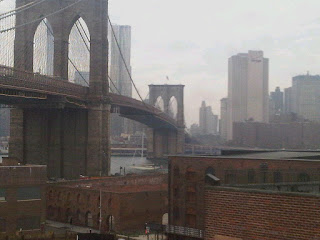 By luck a friend took this photo of Aurelius under the Brooklyn Bridge. 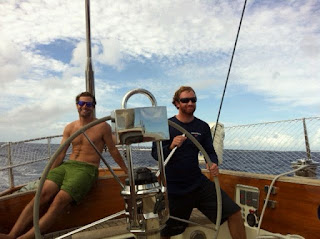 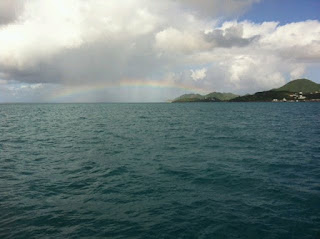 ﻿
A little side story.
The small world of yachting, even at the top of the world. My son Chauncey first met Joey during the M/Y Began expedition to conquer the North East Passage. Joey was on a Ketch called Fiona. Both enterprises were successful in making the crossing in one season. 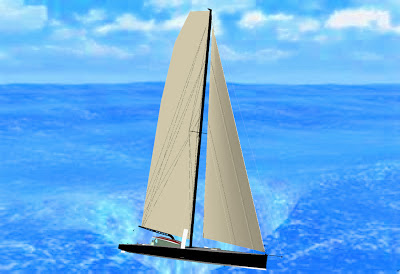 In a few days the Everest of Sailing is starting. Non stop round the world, no assistance aboard 60' boats-projectile handled by a single person. The following has been written September 17, 2010, and originally published by: httP://www.sailinganarchy.com The Open Class 60's has always been for me one of the most interesting sailing vessel ever conceived. In her scope, her goal, her pace along with the stamina of her single-handed Driver. So over the years, I have compiled a maximum of data, information and designs to create and expand with an on going R & D for the beast. The boat is designed with the Vendee Globe in mind. Therefore the total aspect of the design has to be considered for this Marathon at sea. Ergonomically, simplicity, functionability and speed. 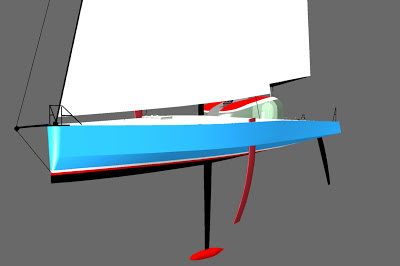 The shape has a few pecularities. A "Potemkin" bow allows a fine water entry and the reverse curve of the bow gives a wide drier deck for a strong base to the permanent installation of the bowsprit. The rest of the boat is built on a chined platform, wide in beam and almost wider at the transom. The chine separates the water, breaks the wetted area downwind while optimizing the placement of water ballast for upwind stability and downwind trim. The flat Veed stern narrows the waterline for a less sticky transom while keeping the buttocks as straight and flat as possible. 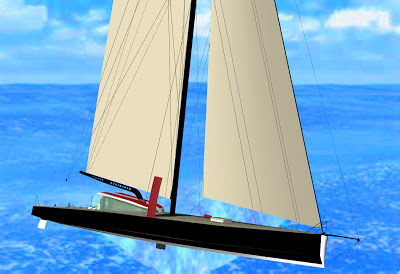 The lines are carried towards the bow in a deep and sharp section to give some grip to the water when going upwind. The slight reverse curve given to the sheerline delays the incoming water and reduces the freeboard aft. The deck features the interesting double companionway, separated by a trench. First seen on a Mini Transat 6.5M. in 1991,this arrangement permits to centralize the lines coming from the mast and gives a cleaner side decks. I also needed in my case, to give a strong support to the boom vang/combination. The two entries offer protection to the helmsman and a better view when steering. 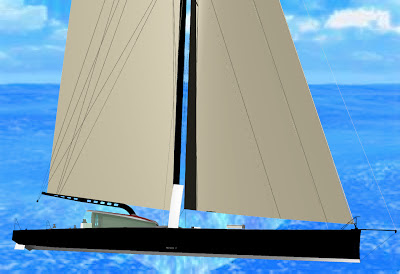 The twin outboard rudders, placed well to the sides are out of the wake exit and are perpendicular to the bottom angle. In case of hitting something, the rudders swing aft, thanks to a "fuse" line build into the system. The keel is designed to carry all of its lead into the shape of the bulb for maximium stability. The planform is designed to maximize the aspect ratio available with an optimized sweepback angle. But the most important part has to be the integrity and strength that have to be given to this heavily loaded pendulum keel. The curved dagger boards are placed as far as outboard as possible in order to take advantage of their higher aspect ratio to produce lift with increased stability and less leeway. 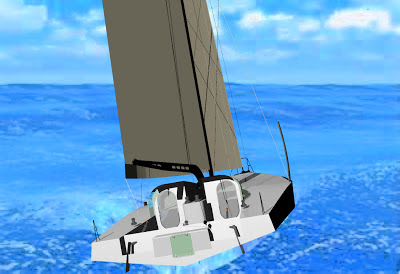 The Sail Plan represents an effort to place the mast as far aft as dictated by balancing the rig with the appendages. The column stability of the rotating mast is managed by a three-diamond wire systemm much preferred in my view to outriggers. The Main flat top is in line with what is the norm now. The large fore triangle is divided to accommodate four different distribution of the available sail area within the ten sails permitted. I would like to think that the overall design conveys a desire to achieve the best possibilities and straightforwardness with wherewithal. 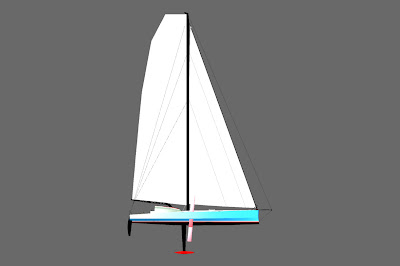 Posted by Tanton Yacht Designs at 6:12 PM No comments: