Newport was the America's Cup battleground for generations. The competition against sailing nations was the motive. The sailing boats involved, were the best that Traditional Yachting could offer at the time.

Now it's all different. Last week, in the sailing Capital of the world, the lethal weapon of choice became 45' catamarans zipping along the Narragansett bay. Close to the Fort Adams which never fired a shot. Great spectacle, offered to a public of over 60000 people who came to see sailboat racing over the few days of the competition. That is a first in Newport, I think. All good for the sport.

I very much enjoyed the show, and being practical about America's Cup venues, I applaud at anything to get the "Old Mug" going for a long time.
But for me, the America's Cup was a "Victorian Affair". Important, were the Nationalist aspects, when designers, builders, manufacturers had to represent the best of the respective countries challenging for the Cup. 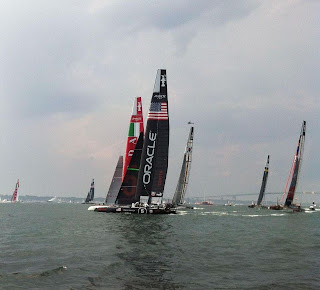 ﻿
A little side story. When I was working for Andre Mauric, the French architect, in the first of Baron Bich Challenges for the Cup; there was little known about the design of a Twelves-Metre Yacht.
Intrepid had won the previous America's Cup and was a breakthrough 12M. Of course, the plans were not made available to us.
Therefore, in order to reproduce the boat, to establish a set of data, we went about to redesign Intrepid based on the Rating Certificate and 2000 photos. 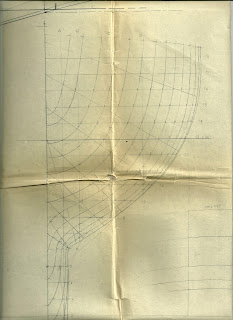 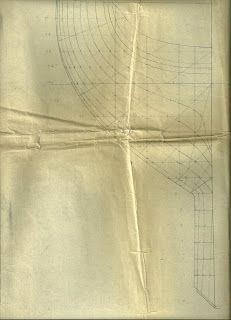 Scrolls of the Dead Sea.
Posted by Tanton Yacht Designs at 2:56 PM No comments: