Duel in the Solent 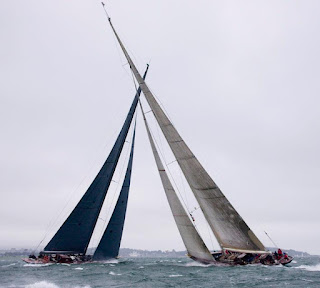 Photo by Kos
Recently, four International J Class boats battled in England. Lionheart, Rainbow, Ranger and Velsheda. Missing the action were Endeavour and her sister ship Hanuman. To see the Majesty in pictures of these vessels make you regret of not being there. 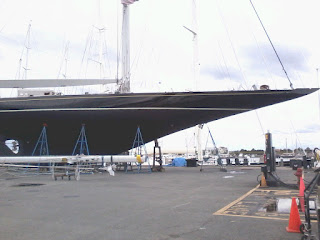 Originally, only ten " modern" J Class were built. The interest in producing a replica, stems from the Endeavour re-building undertaken by Elisabeth Meyer. If I would like to see a new built, the L.Francis Herreshoff "Whirlwind"comes to mind. The longest waterlineJ Class boat at the time, she had a double head rig and was streamlined from bow to stern. Actually, L.Francishe blamed the lackluster performance of the boat in the 1930 trials to her bow; not quite built as designed. "W" had mahogany planking over steel frames with a pine deck. A new version would be made of metal. Anyone interested? Has anyone secured the rights?

About 40 years ago, driving to Maine for a wedding taking place near the town of Bath. Little did I know at the time, that the bride was related to the founders of Bath Iron Works. The family compound, located on a Peninsula, featured many separate buildings including the main house with an incredible collection of figureheads from long gone Clippers and tracked down from the Falklands, the China Sea and from other far flung places. But that is not the story.
Bath has a Maritime Museum, dedicated to the B.I.W, then the Congoleum conglomerate, building Frigates for the Navy " on time and on budget". A proud tradition of Commerce and Seafaring. Strolling in the Museum, with many photos of the past, including the building of Ranger the J Class boat for the 1937 America's Cup, I was wondering what it would take for Bath Iron Works to built a replica of this magnificent vessel ? I was a little ahead of the time. The A.C had switched to the International 12M. and to resurrect a Mammoth boat seemed futile to even ask. How wrong can I be. The J Class is thriving now. 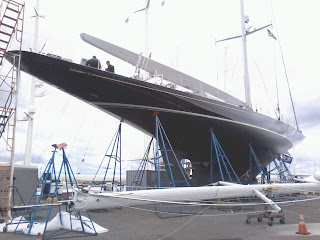 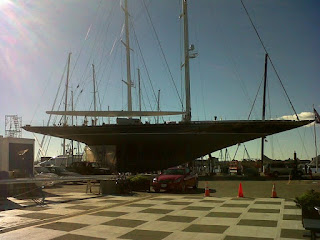 Posted by Tanton Yacht Designs at 11:05 AM No comments: