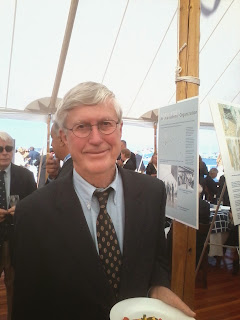 - I could not believe it today. I went with my daughter to the crowd gathering at the New York Yacht Club to celebrate the many accomplishments of Ted Hood, the sailmaker, entrepreneur, and yacht designer.

- One is dead the other, Richard E. Carter is resurrected.

- Let's backtrack, it had been announced a while ago that Dick had passed away a few years ago. The rumor had been around, pursued in this blog, sailing web sites and by many people that this had been the case.

- What was not my surprise, as I strolled the ground under the tent to see across the serving table a familiar face that I had not seen in 40 years, Dick my boss at Carter Offshore. I look on, in shock.

- But, the change with age was not drastic and the mannerism was there, and when I called" Dick" he turned around, and with a big smile, we shook hands. Yves-Marie!
Man oh man, was I happy to see him in good health, alive and well and living on Cape Cod. His announced departure much too premature.

- Amazing that in these days and age, news like who is dead cannot be squelched with the first appearance of such an erroneous announcement. It was a sad day and a wonderful day when two men like Frederick Hood and Richard E. Carter, friend and competitor with great influence on the sport crossed my path in such a strange way. 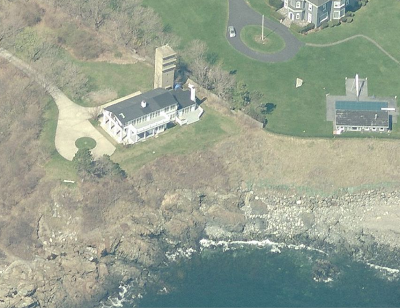 The Tower. Carter Offshore office.
Follow the story at the Forum on:
www.sailinganarchy.com
Carter boat design.