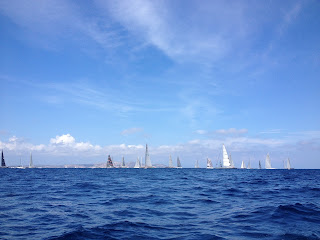 Ran, the Mini Maxi ran the clock with Rolex on this event. Photos by Dominique Tanton. 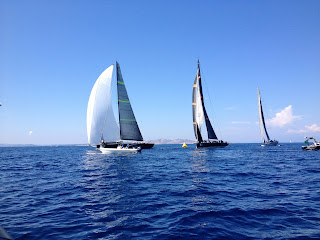 In 1973, yes you read well! Porto Cervo was the brand new resort created by Karin Agha Khan on the Northern tip of Sardinia. With a man who receives his weight in gold each year (a religious thing); Porto Cervo is to this day, the ultimate resort in the Med. That year the One Tonners gathered there for their World Championship. I delivered one of the Carter 43 to this amazing place to cover the event and serves as a base. Our own Ydra, a Carter One Ton was the boat to beat, having won the previous year. We know the story. Ydra won again, but a small boat Ganbare stole the show with a newer concept about designing boats to the relatively new I. O.R rule. That is not the part I want to write about.
Sailmakers have been influencial to direct potential clients to boat designers. They needed boats for their product. But, none did better at it than Lowell North of North Sails, a relatively small outfit at the time, soon to become the one Logo to have aboard. Here in Italy, rubbing shoulders with Ron Holland (with no boat there, but having just won the 1/4 Ton Cup) and Doug Peterson we could sense the wind of changes. Hood did too and certainly at Carter offshore. North Sails created the marketing momentum, to push customers for Doug, Ron, Dubois and others with talent, to deliver new boats with large inventory required to sail those I.O.R boats and in the process, establishing a new era with new blood.
Posted by Tanton Yacht Designs at 12:08 PM