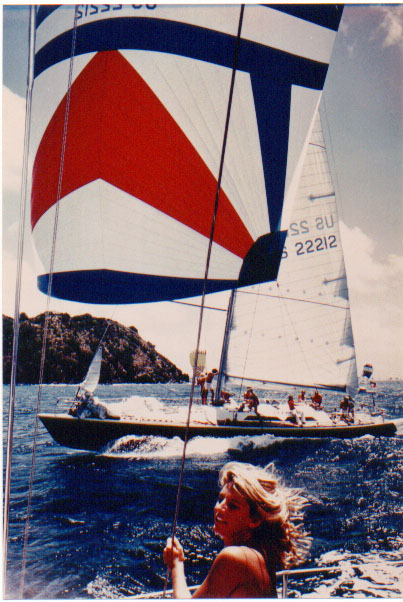 John Raby and Don Ritter Circus Maximus 67'
﻿
Well I missed again one of the best organized sailing event in the world; Antigua Race Week is a lot of fun and actually quite different from the other venues of St. Barth and St. Martin. I guess it has to do with the Island being more "British" with the Admiral Nelson's legacy hovering the docks and Shirley's Heights. I raced there a few times on different boats 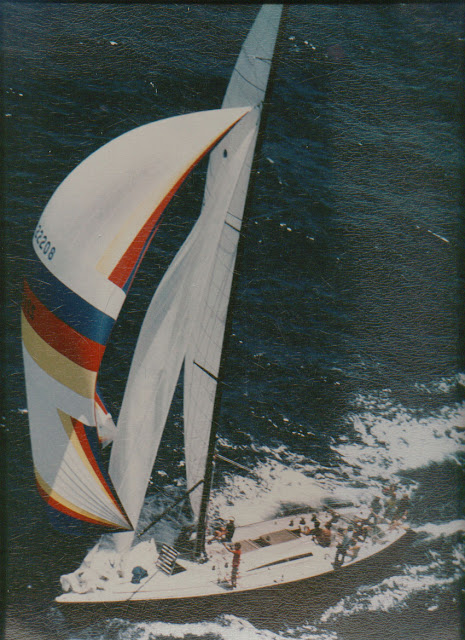 John Tuttle and the 57' U.L.D.B Desperado.
We had Tee shirts reading " The 25 Knots Club". At he time it was seldom to see boats making that kind of speed, especially for boats designed under the I.O.R rule. 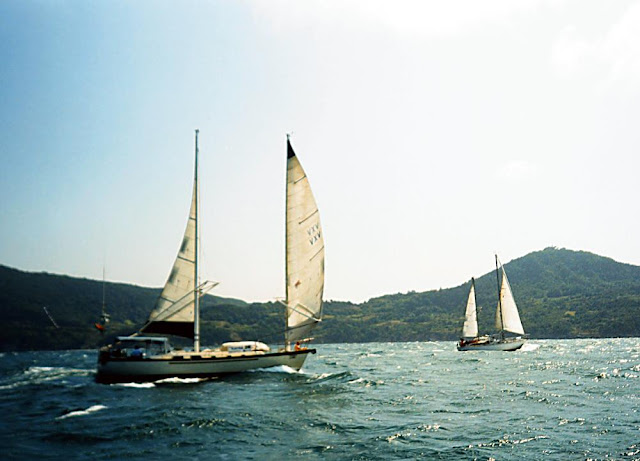 Hans and Gisela of the S/V Cat-Ketch Tunnix  from Venezuela.
They had one of my first Cat-Ketch T.43 built in Taiwan. They had sent a Fax to the office inviting me to race the Sailing Week and I replied yes, I would. So the next thing I know I am in Antigua, taking a launch to get to the boat. I could see her free standing masts 1/2 a mile away and as I approach, it became clear that no one was around. I jumped aboard and waited. After a while I see a Zodiac coming towards me then suddenly taking at distance a wide circle in a slow motion. Finally the two occupants came alongside to take a long look at me. A little puzzled, as much as I was by their initial reaction, they explained later that when they invited me, they had no idea if I were Chinese (Taiwanese), A girl, (Yves first name pronounced Eve), young, old or an  intruder. I did not have the same problem withe their appearance. More blond, more German, you could not find, even from Venezuela.


Christian Quoniam's Magie Noire 66'.
Incongruous to come to the starting line with a free standing rigged Cat-Schooner. A charter boat, M-N. was no match to the Maxis Kialoa and others engaged in the race. We had a great time though. This was my first sail on the boat built by the owner in La Rochelle, France. The unconventional sailboat featured wing sails, wing keel, water ballast and is very easy to sail. 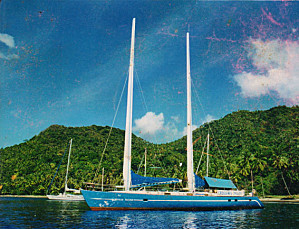 Posted by Tanton Yacht Designs at 6:09 PM No comments: