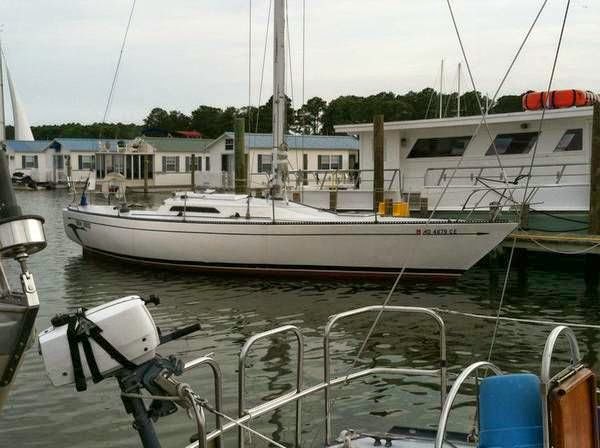 - Going on with the Memories of an earlier Post.

-In a rare delirious moment, I bid on eBay for this Carter Texas One Ton. It did not happen. in the end, I did not get her.
If the anonymous buyer ever sees this writing, he can get in touch with me anytime.

- Storytelling about this production boat from Carter Offshore. Back in 1973, after winning the One Ton World Championship with the thoroughbred Ydra, we could not prevent to recognize the small yearling Ganbare. The Doug Peterson design coming in second place showed all of us a new direction. A lighter boat by 2500lbs. narrower lines, pintail stern, and superbly sailed; she got the attention. The influence of California started to be felt. For a new response to evolution within the very popular One Ton Class, the next move for Carter offshore was to design a new production boat.
- The Texas One Ton. Plastrend's Andy Greene, later Composite Technologies of Fort Worth was the builder, with molds crafted by Tom Dreyfus out of the new CFlex system by Seeman.
The boat proper was a crossover between Ydra and Ganbare, not as light because of the weight attributed to accommodation but with plenty of sail area to compensate. I recall that about 40 have been built.
- Andy Greene was an early guru about composite technologies. Previously known to build small boats, the fame came with the design of revolutionary race-car chassis for Chapparal Cars. Later he became a division of Turner Communications Corp.
Bill Seeman. Inventor. C flex. Also, if not the first, certainly the most successful in proliferating the Fusion system for the Marine Industry.
- Footnote. I believe Vendredi Treize, the Carter 128' single handed racer, built by Tecimar for Jean-Yves Terlain was one of the first using the method way back in 1971.
-Tom Dreyfus. A legend. 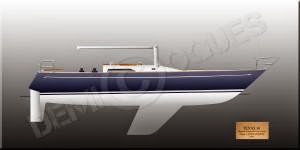