- 1995 Project for the 1996-97 Vendee Globe Race. Designed with a single chine, with straight daggerboards and rotating keel, mast and wishbones. 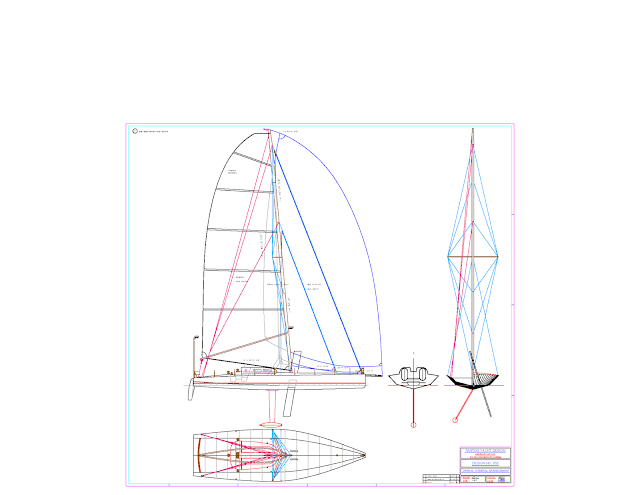 - With just a year to go before the start of the Vendee Globe, and with the Transat Jacques Vabre underway, let's make the point as of now and for the future IMOCAs over the next 12 months. I have no access to files about the newly launched boats and therefore I will start with my own evolution with designs for this very special Class.
- Eventually, with the progress and comments going to be made, I might change my ideas to present a coherent and up to date approach to my own visions.

- Notes: Renderings of past winners' sail plans are by Chevalier- Taglang. 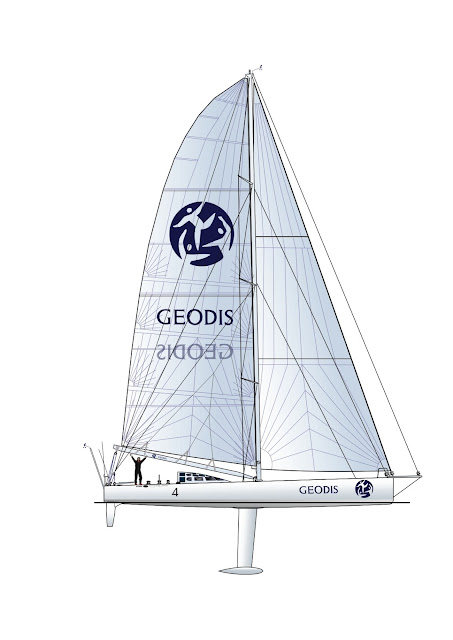 - I let a few years pass by, and a few more V-G  before going back to the subject of designing another IMOCA; unfortunately only for my own consumption.
- But in between, I made a few modifications to the earlier model. Adding a chine above the waterline to increase the power lacking before with the heavily flared topsides. I kept the same mast, rig, keel, and appendages. 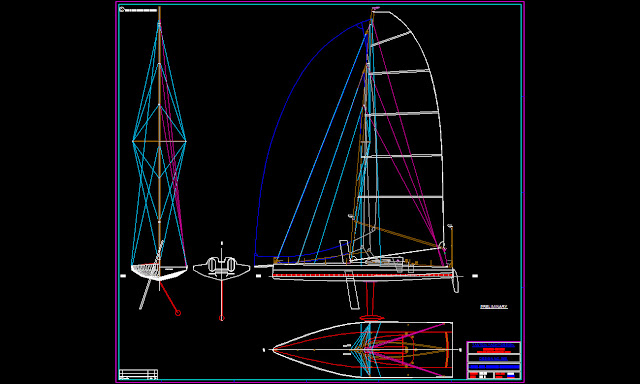 - Now, the Class is strongly entrenched with progress, and with new boats, the evolution is apparent for this V-G 2008-2009.
- My version for the event is also a vision of my own thinking and addresses several options. The most apparent are in the bow shape, the curved dagger-boards, the rudders, and the rig.
- The bow has been made wider and if at the waterline the lines are still sharp, the stem widens towards the height of the deck, while using inversion in the middle. I have been appalled by the wetness of the '60s and I tried to alleviate the impact of the water while increasing volume high up. On other boats, given the opportunity, I usually take advantage of this added volume. I have always admired the Bill Tripp rounded bow of Ondine for example. The main reason at the time was to elongate the waterline when heeled over the short waterlines sailboats designed under the C.C.A rules. 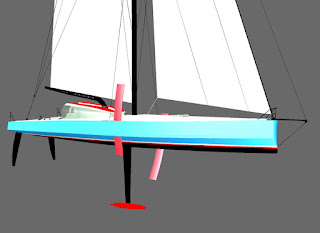 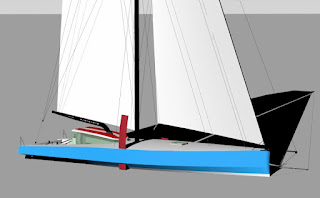 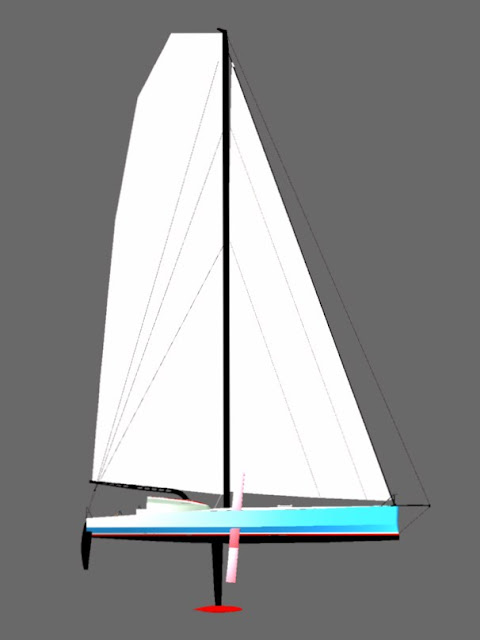 - Next, the large asymmetrical daggerboards are now curved and positioned as far outboard as possible; and as already seen on ORMA 60 catamarans.
- The rudders have been moved inboard to minimize the problem of cavitation. The new location dictates a different shape.
- The rotating mast with spreaders has not changed, but the wishbones have been replaced by a boom, albeit unconventional and reminiscent of the Hoyt boom, designed to self-control and self-tacking a jib. The idea is to eliminate the boom vang and to prevent the main from raising up under tension making it very difficult to trim the mainsail. I have not adopted the outrigger spreaders located on the deck. 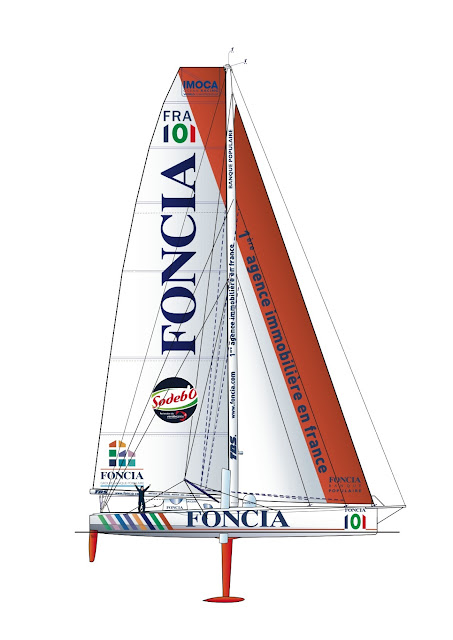 - For this Race around the world, nonstop, none assistance, we are still in a pre-foiling era. This event took place before the America's Cup 2013 which made you think then, about adopting the more or less horizontal boards to enhance stability and made you glide, not flying yet. We leave this approach for later.
- I am still very much partisan of my shape for the hull; sharper and flatter from forward to aft below the waterline and boxy above for a simplified hard chine connection.
- I concentrate again on the bow shape. With the mast and the center of effort moving aft emphasizes the foretriangle being push forward, it is becoming essential to building up the volume in the bow to avoid pitchpoling.
- For the rig, I removed some wiring but kept the single spreader and again did not used outriggers. 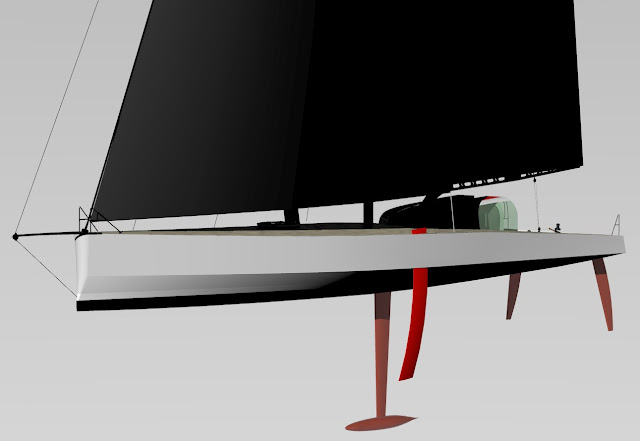 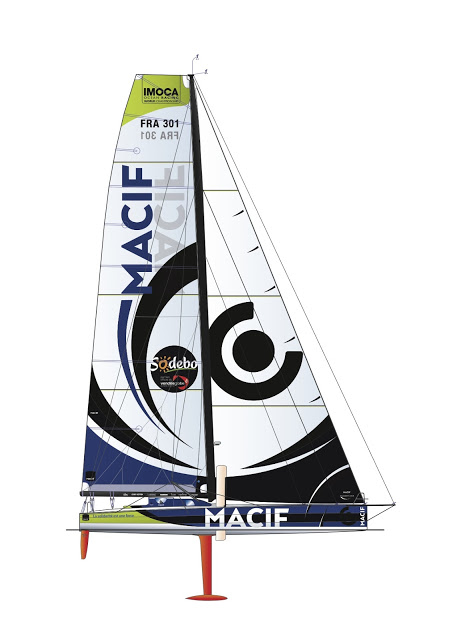 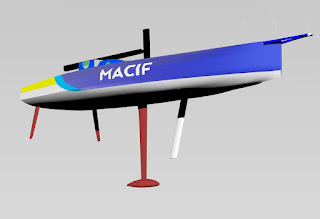 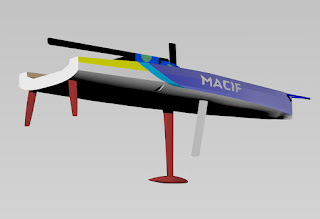