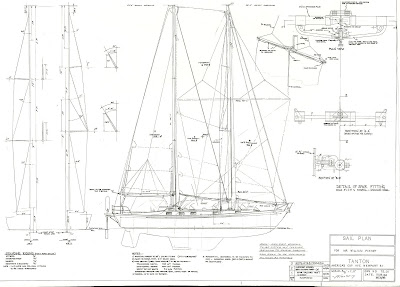 - I have no experience with Drogue, never had to use one.
If you read through the above caption on S.A, you get an idea of what it is.
- So, I thought to share the experience of one of my clients writing to me about his own sailing and tribulation with the drogue object in question; it is an interesting take.

- The following is from B.P.  Privacy is a concern, except that he is a very well known author. Including about his latest book about the Chappaquiddick incident. " Chappaquiddick Speaks".

- Back to the subject.
- South-Pacific, his integral letter follows.

- " I am sure this letter comes as a surprise, but I've got a lot of time on my hands and thought I'd drop you a line. I'm writing this at 37deg. S. Latitude, 140deg. W longitude about a week out of Pitcairn Island  (if the storm coming along in the next few hours doesn' do me in, and the umpteen ones rolling in behind it).  Two weeks or so far from the Chatams, which are a small group of islands about 450 miles southeast of New Zealand.
The weather has been mostly miserable, with the wind almost constantly out of the north. that seems to be a problem in the Southern Ocean.

- My own note: the letter will read like a novel.  So have the patience for me to copy. (to be continued). Meantime, the news that prompted this segment in the Blog.