IMOCA. Moustache ou pas?
That is the question? At least for the way it's presented, or with something else?

- Vendee Globe Race 2016. The most exciting event in sailboat racing, going around the world single-handed aboard sophisticated 60' machines, without stop nor assistance, and the last time in 78 days, 4 years ago.
- This year, the last generation of boats is with foils, lifting the hull to reduce displacement and drag, with the aim to increase performance. The problem, the older boats have won all the major races since the last edition according to the VendeeGlobe Organization. For an introduction, the video of the Edmond de Rothschild makes you appreciate what is involved.

- My own interest in foils, besides keels and rudders, happened when I ran across the Palmquist's Patent in the late '80s. What would be called DSS today, being something very similar in most aspects. At the time, I designed the Monomaran following the principles of the original patent but adopted a different hull shape. 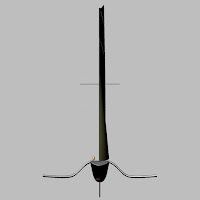 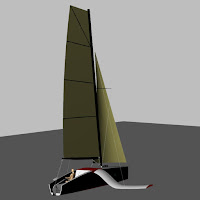 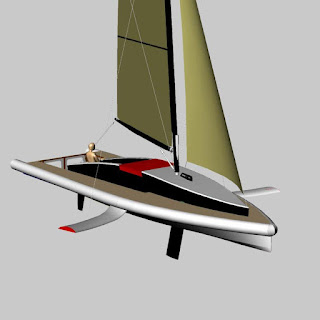 - Then came a 30' with variable geometry, pushing the side daggerboard to the stern to compensate for the diverse positions of the swing keel. Admittedly something that would need some serious trials and error. I think that stern location could be of benefit to powerboats. (see older Post: L'Aileron). 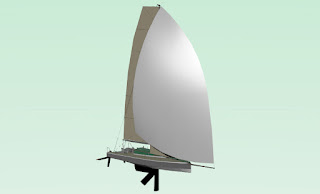 - Then came one IMOCA study with curved foils. The rules allow for 5 appendages and where previously we had straight daggerboards to fight leeway, they became curved to add lift. For more information, see older Post: Vendee Globe 2012.

- Then came last America's Cup with foiling, catamarans barely touching the water; the closest to airlift. I used the same kind of foils on an IMOCA rendering. The conventional daggerboard is bent in half to give both lift and resistance to drifting. The problem came with the need to close the foil flush with the hull. Implicating the build of internal boxes to receive the two arms; one to be deployed, the other one to close the hull. A complicated system, see older Post: Amica 60 Shape and the America's Cup 2013.

- After the above and the video maybe you want to see mustache(s) on IMOCA's boats. Two examples. Safran and Rothschild. One is retracted, the other is deployed into position. The inboard end to lift the boat, the outboard to prevent sagging sideways with its vertical tongue. It is not hard to see that you need serious construction and reinforcement to take on the loads. The last Transat did not bode well for the system. Of the new boats fitted with mustaches, only one managed to finish the race. 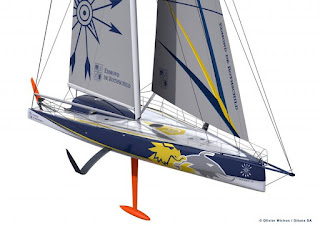 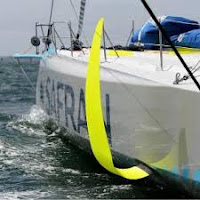 - Considering all the above of the current crop, maybe there is another venue. Affronting a Vendee Globe is prone to offer plenty of opportunities for breakage between all the appendages. My proposition is to dial down and fit what is, in fact, an old fashion leeboard. Articulated on the outside of the hull and fitted with a fuse line to retract against the shell. Imoca boats are not the best approach to test considering the expense, but I am using the current coverage to advance with the proposition and its extension to another type of sailboats.

- For this project, the length of the daggerboard as seen on many Imoca's 60 is the starting point. It's area, depth is as efficient as possible to counteract leeway. Certainly compared to the vertical part of the Moustache as seen on the new boats. There is no need to curve the board, the sideboard creates the foiling lift. This type of boats are sailing at a high angle of heel and the topsides and daggerboard will duplicate that angle.

- The plank board set perpendicular in this example will have to be studied with a prototype or tank testing to establish its proper height, angle, and shape built into the dagger.