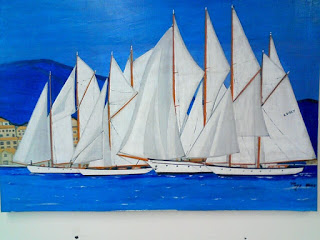 Following the Regates Royales de Cannes in September, the Classic yachts moved to St. Tropez for the annual rendez-vous of the Sails of St Tropez. The greatest display of the most admired boats in the world. They came from everywhere. Divided in 3 classes, the participation included 10 Wally's, multitude of Traditional Yachts and 161 "Modernes". Not being there, something is missing. 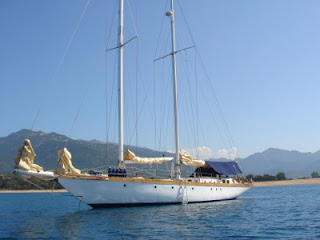 A little side story about the Regates Royales de Cannes.

Back in 1970, aboard Europe our 72' schooner, we were docked next to the magnificent 114' schooner  belonging to Jean-Claude Brouillet. J-C was an adventurer, a pilot, who built his fortune in the air and in the jungle of Africa. His love for boats came with the 1914 Sumurun, still plying the water of Newport to these days. Then came Ashanti, a masterpiece by Gruber, the designer and Burmeister the builder. Jean-Claude renamed the boat Afaneti, because of the reaction of his crew from Togo, seeing the tall masts and comparing them to their trees in the forest. We became fast friends in view of our common interest. As it is, we soon developed the idea of a race for Classic boats in the Bay of Cannes. Making fliers and the round of harbors, here and there we managed to gather half a dozen wooden boats. I remember in particular the sisterships of Finisterre and Figaro, both Sparkman and Stephens designs. I quickly devised a handicap formula based on very basic characteristics of the vessels. The race went on with perfect weather and it was a lot of fun.
Originally started in 1929, the Y-C de Cannes relaunched the "revived" Regates Royales 8 years later.  Last September 85 boats participated in a week of racing. 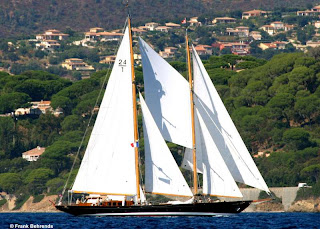 Posted by Tanton Yacht Designs at 1:39 PM No comments:

The passing of Brit Chance, the gifted yacht designer saddened me.
- A little side story.

- Early in my career, in the 60's, I read in a French Magazine the word "genius" associated with Britton Chance's design. I said to myself; I want to work for someone like that. Later, while I was working for the French architect Andre Mauric on the 12 Meter Challenge for the America's Cup launched by Baron Bich, the "President" hired Britton Chance to design a trial horse. So, I met him during the building of "Chancegger" in Switzerland, where from time to time I got to go.

- Still later on, I approached him for a design job in his office in the US. A few months later I received my Green Card, sponsored by him and Olin and Roderick Stephens.

- The card arrived faster than expected and Brit was not quite ready to employ me. The possibility of working for Sparkman & Stephens was also there, but I did not wanted to work in New-York City. A few days later, I was hired by Dick Carter and this is another story.

Posted by Tanton Yacht Designs at 1:40 PM No comments: 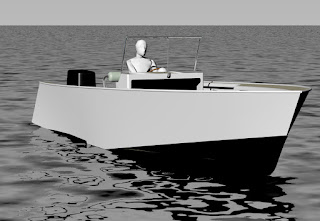 - There are only a few small aluminum boats featuring single step hulls. The concept is making in-roads with fiberglass construction being more amenable to be molded in quantity. Nevertheless, I wanted to see a CFD'sstudy for a 24' simple, single-step hull. Numeca International, already mentioned in a previous post, provided the results.  sales@numeca.be

- Being a hydroplane she presents 2 angles of attack with 2 planing areas. The image below shows her riding on points amidships and aft to get a moment of equilibrium. Speed, as shown, is 34.5 knots. 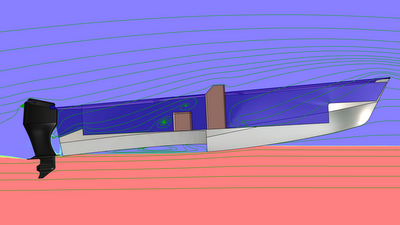 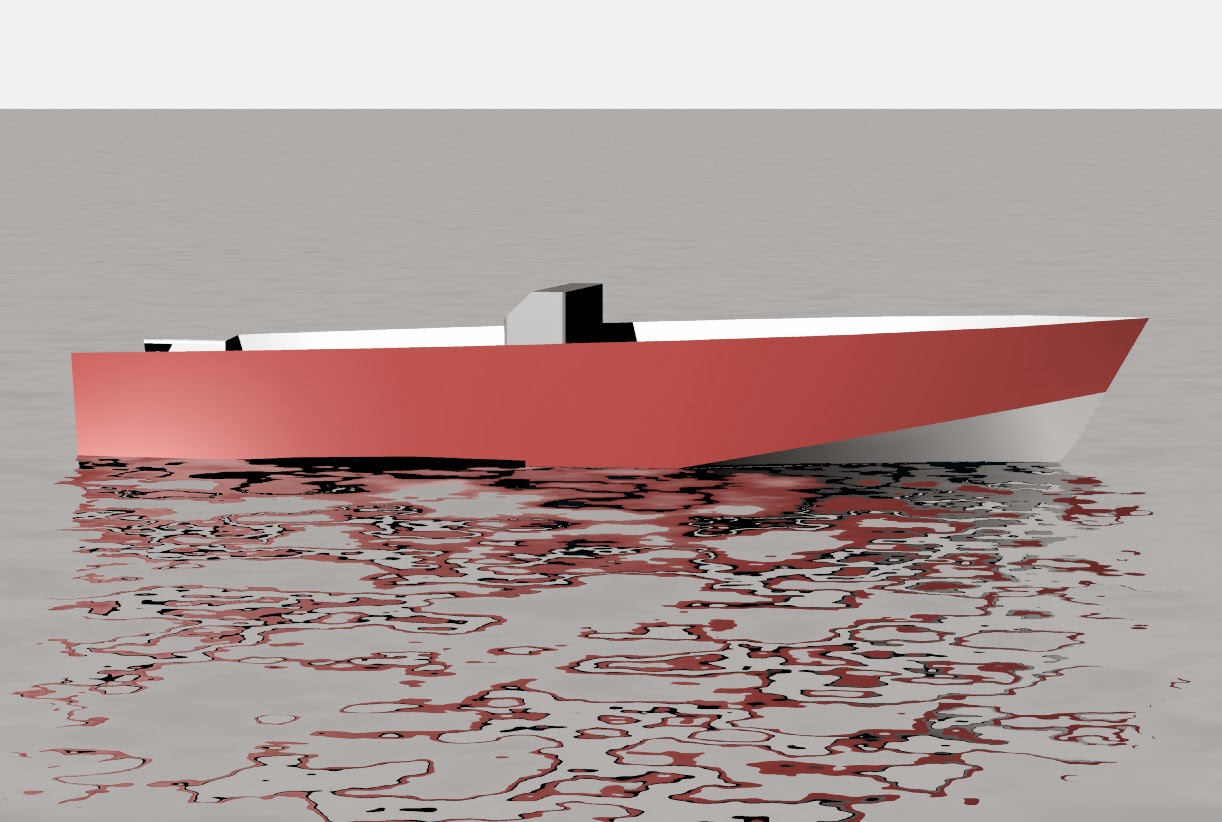 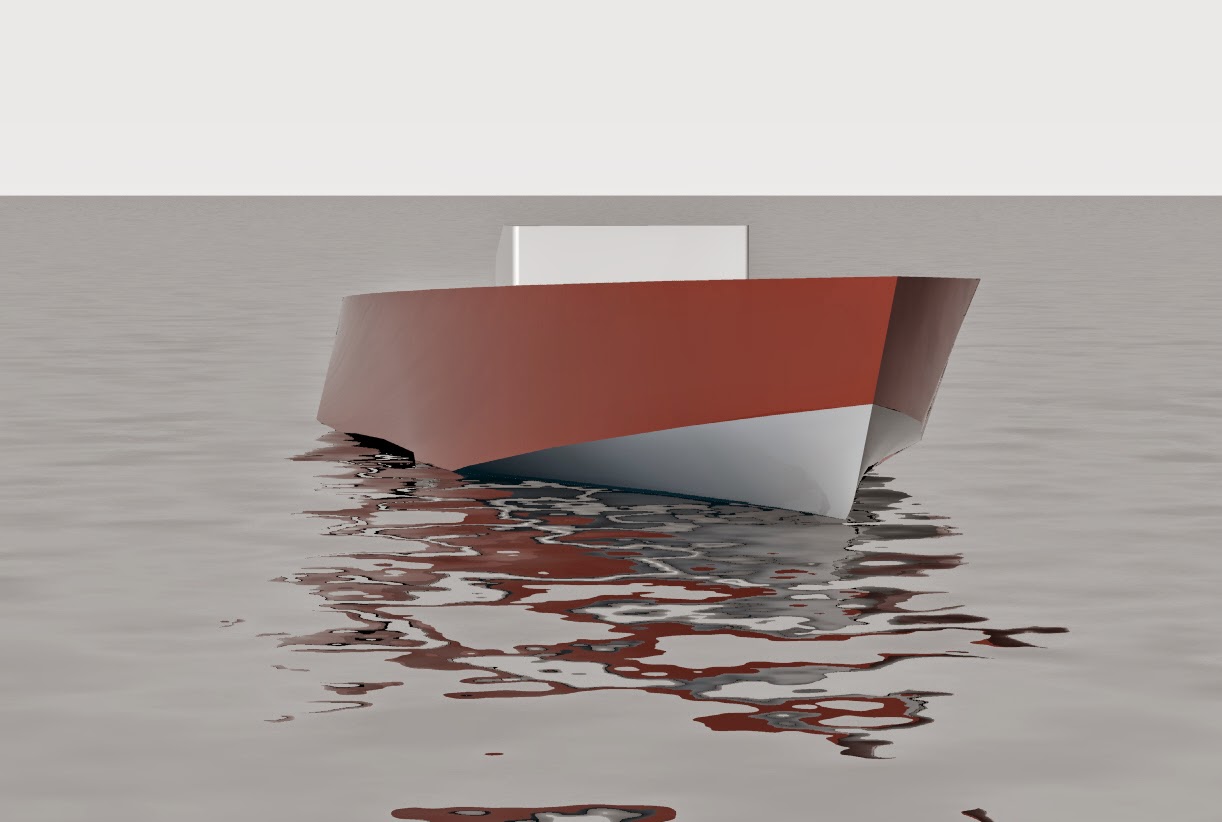 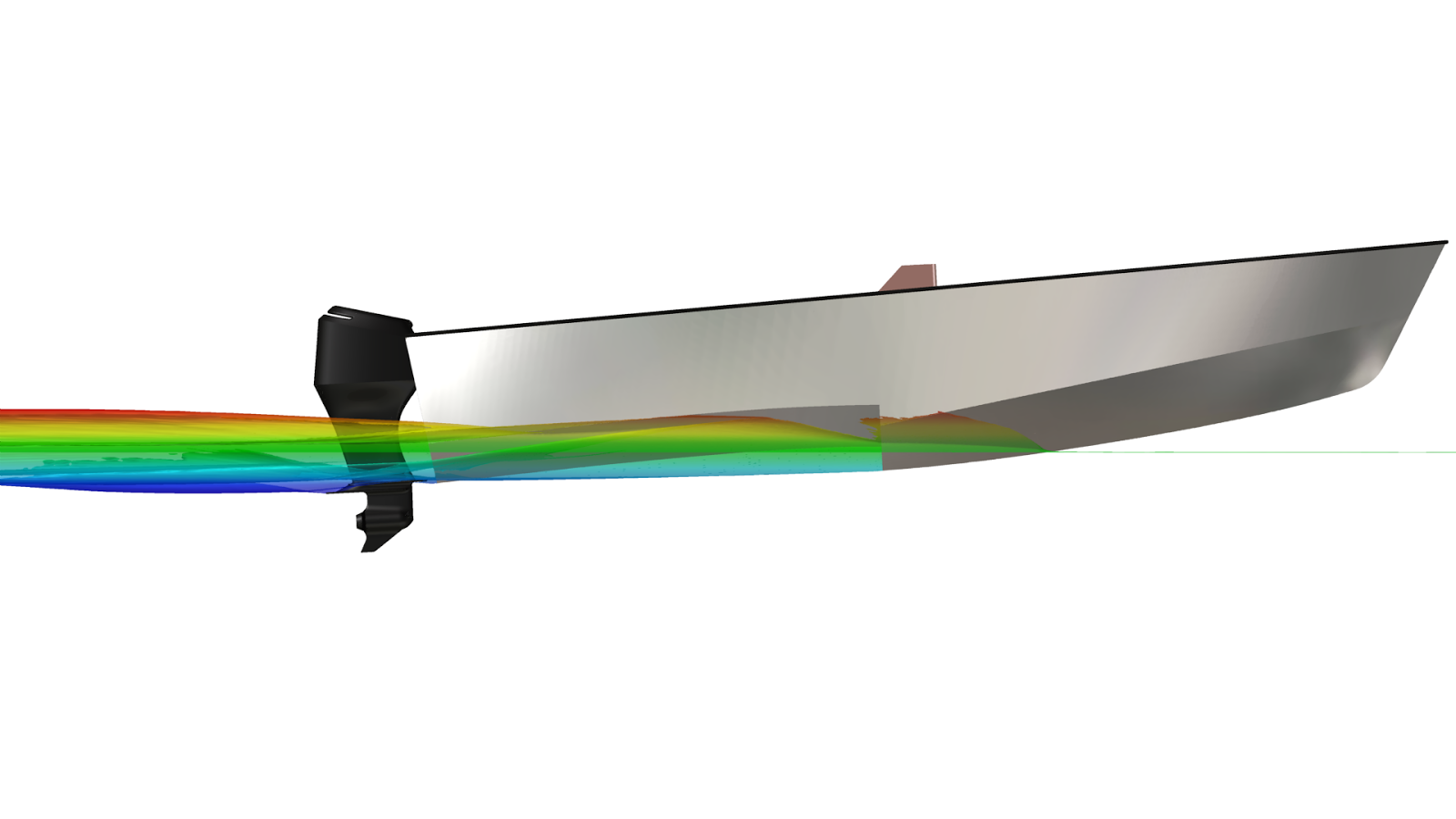 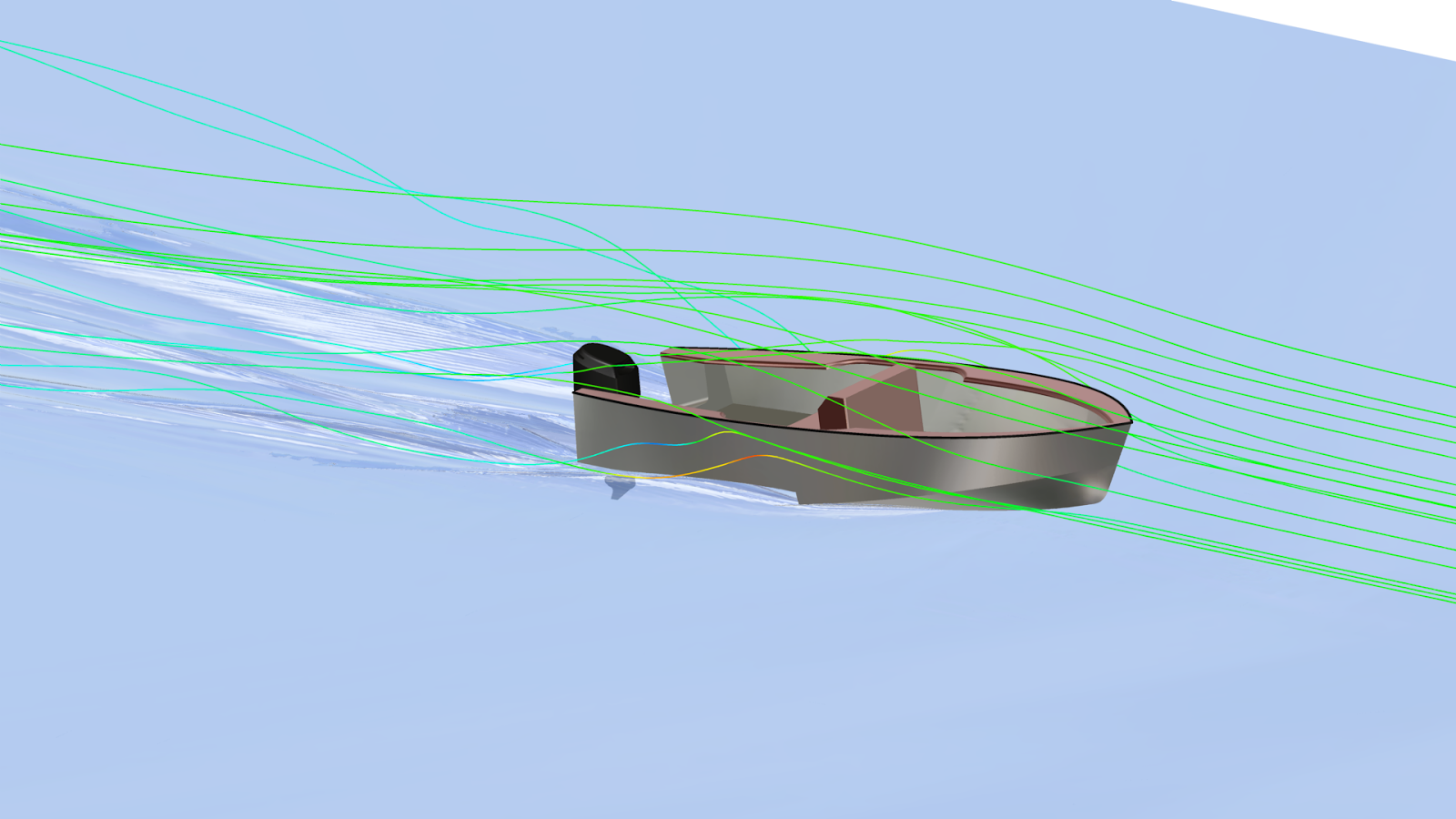 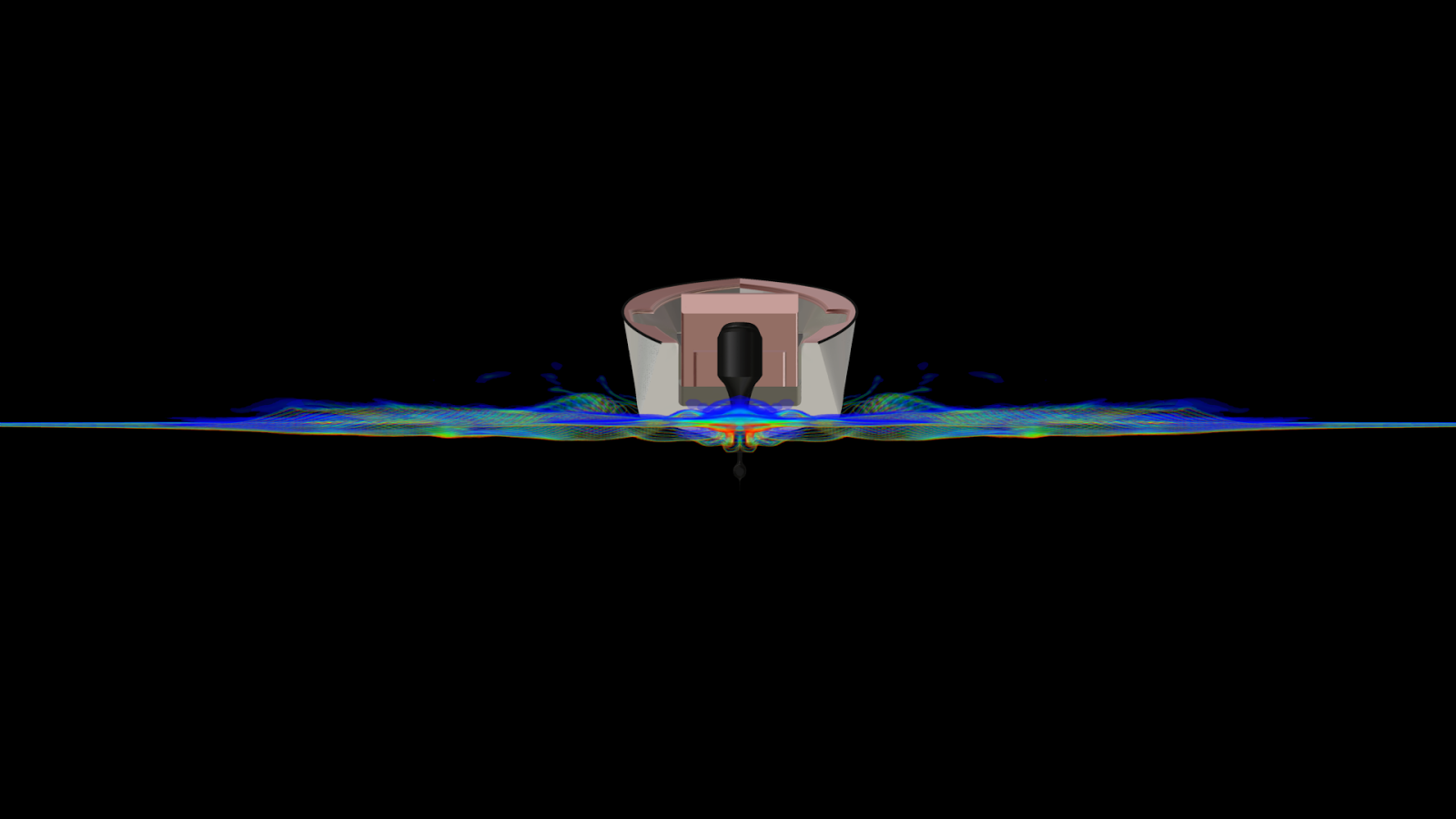 Recent interest, May 2014 led to preliminaries for a 28' version. This longer boat might end up having
another step built-in.

Posted by Tanton Yacht Designs at 12:24 PM No comments:

The Other Side of the Ice. The book. 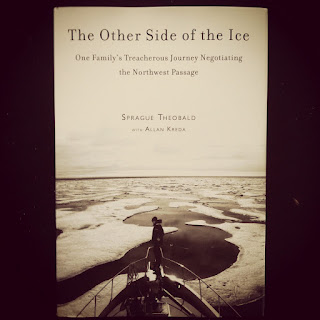 - In another post I related the adventure of a life time, going through the North-West Passage. Now the Sprague Theobald's book is out. Soon followed by the Movie. Amazon has several customers reviews that are revealing.
Chauncey 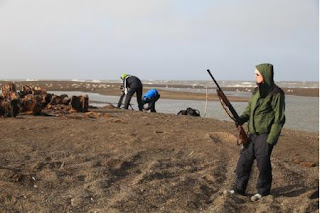 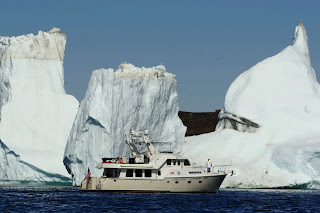 Posted by Tanton Yacht Designs at 11:09 AM No comments: 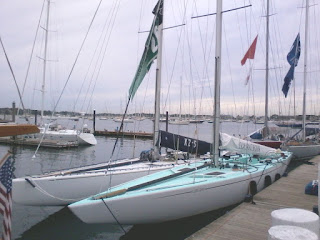 - I am a little late now, but a couple of weekends ago some of the heavies of the past America's Cup and Twelve Meter came to Newport. Ted Turner in the Classic Division, Dennis Conner and Tom Whidden in the Grand Prix Division. Victory 83, owned by Dennis Williams won the Modern division. Alan Hanover won the Traditional division. I have fond memories sailing the Twelves aboard Constellation, Sovereign and Kurrewa. Thanks to the A.F.C.A and Baron Bich, I was able to complete the French National Service, designed for A. Mauric, sailed as often as possible and pursue studies at the E.N.S.M with emphasis on Tank testing. Good, solid two years. 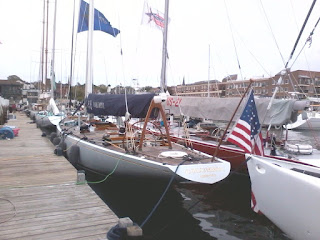 Posted by Tanton Yacht Designs at 11:33 AM 3 comments: