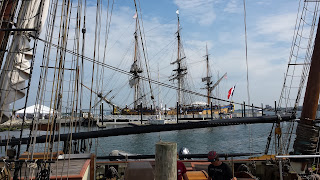 Extracts from Newport this week; Pat Blakeley.
L'Hermione, the almost authentic replica of the 210' ship that carried the Marquis de Lafayette to America with news of  French support for the revolution in 1780.
The reconstructed French frigate took almost 20 years and $30 million to build. The Hermione was the fastest ship of its day, and the replica was constructed to original specifications in Rochefort France, where the first ship was built. The original vessel took 11 months to build. her namesake used the 18th century building techniques to re-create the three masted frigate. Two thousand oak trees were selected for their size and curvature to make the hull, and 26 cannons were cast by the same foundry that had supplied armament for the first L'Hermione. More than 15 miles of rigging was needed to outfit the vessel, and 19 linen sails encompassing more than 2,200 square yards, were hand stitched.

Read more »
Posted by Tanton Yacht Designs at 11:09 AM No comments: 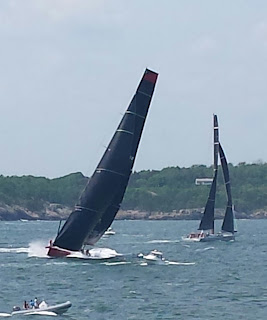 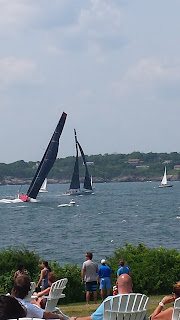 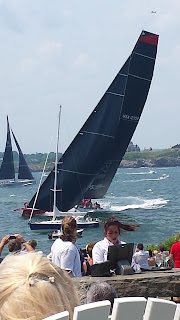 Today was the last of the staggered starts for the 2015 Transatlantic race.
Featuring Phaedo 2 and Paradox, the two trimarans and then Rambler and Comanche the monohulls.
After a couple of hours, instant speed gives Phaedo at 31knots and Comanche and rambler at 20. 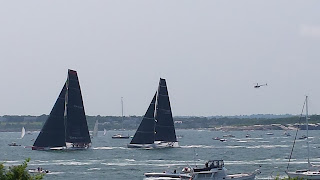 Posted by Tanton Yacht Designs at 5:46 PM No comments: