- JR stands for junk rig. Elia is my tentative to adopt a modern approach to this most ancient system of sails.

- But first a little side story.

- This is about my experience or lack of it with the rig. A friend of mine owns a Junk, yes a real one. Born in Hong Kong, I do not know how she ended up here. A 3 masted vessel with a typical Chinese Junk set up. The first mast right on the bow and inclined forward followed by the 2 other spars. Invited aboard, the two of us went out for an afternoon sail. The breeze was light and soon we stopped the engine to be on our way. It was not long before we had to tack in order to avoid running into Fort Adams. This is when the owner told me that we have to start the engine, otherwise the boat will not come over. Surprised I said, "Why not?" Simply, she won't come about with this light breeze was his answer. I asked him to let me try. So, we did and the tack was achieved in a smooth way with no problem. The end of the story is that for the rest of the time we could not change course without having to start the engine. Beginner's luck! yes, but leaving me with a poor impression for the whole lot.

- Regularly, over the years the subject of J.R came as a question for such and such boats of my design. I avoided transforming an existing work, drawn for another rig to be modified. As you might know with this blog or my production, my affinity for free-standing rigs stands over the past 40 years. And free-standing masts are often associated with J.R. even if it is not always the norm going back a long time.
- But, a T 43 owner asked for me to do a study, a sort of R&D to see how a junk rig could be adopted on his boat. Since the 2 masts of this Cat-Ketch are where you might expect to be on a J.R. I pursued the question. 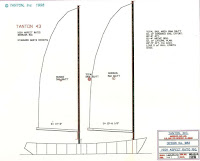 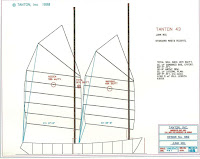 - By comparing the 2 drawings it is immediately apparent that for a given sail area we are showing a much compact sail plan. Purposely, I kept the original masts to show that about a third of the length could be cut down; considering the spars are not deck-stepped and are going through the deck. The other conclusion is that the center of effort of the sails is 2.5'  (762mm) lower. On a cruising boat, those two factors can only be beneficial; saving weight aloft, increase stability and with the ease of reefing attributed to the Chinese junk rig, what is not to like? 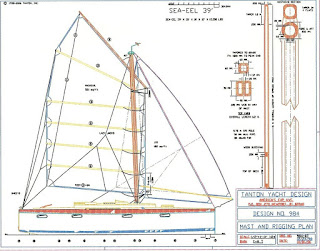 - I completed plans for what I call a Box Boat, a simple shape a la Bolger; and with it was my first attempt at a J.R. I know of one purchaser of the plans going to France, but have not been able to confirm if the Box has ever been built. The sail plan is a classic example; a flat cut mainsail with full-length battens and lines to control the twist on the leach. Lazyjacks are installed to receive the sail when lowered or reefed, a simple and efficient way to go. I have added a small jib and a reacher to increase the sail area for light air sailing and not to burden the boat by having a larger main and more weight high up. 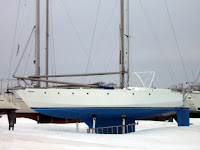 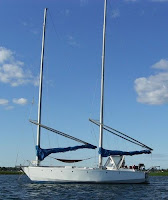 - Now, with a flashback about my history associated with free-standing rigs, wing masts, sail plans, and trying to find solutions for easier sailing. My first attempt was the "Ocean Going Volkswagen"; a 37' triple chines, flush deck for steel or aluminum construction and fitted with free-standing masts and wishbones booms. The Cat-Ketch was well received by amateurs who wanted a relatively simple boat to build and Metal Craft of Canada produced half a dozen in aluminum.

- See also on this Blog:
Search: Cat ketch if you can.

- The next step: a production boat, the T43 followed by the 45 as seen on the following drawings. Built-in Taiwan, in the early days, soon to become the Mecca for sailors, promoters and dealers to develop quite a striving boating industry, 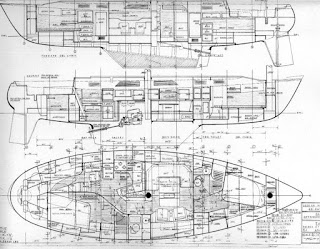 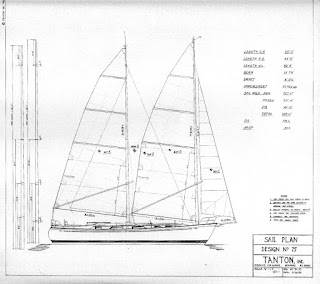 - From aluminum on the triple chines OGW37 simple boats, the masts on the 43 and 45 jumped to carbon fiber. Being so early in the game of composite masts, we were lucky to be associated with an aerospace manufacturer.

- Another candidate, the 60' is fitted with turning masts and conventional sails. 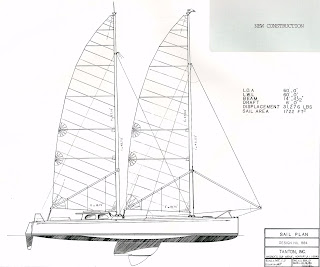 - At about the same time, a young Frenchman approached me to design a light displacement boat; the Magie-Noire. The main features being free-standing masts and wing sails. The following article will give you more insight into this unique vessel. The boat has logged more than 80,000 miles in the Atlantique and the Med. 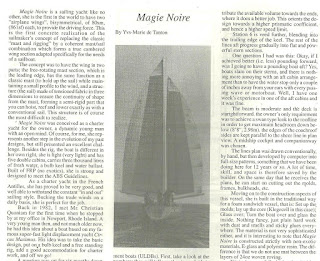 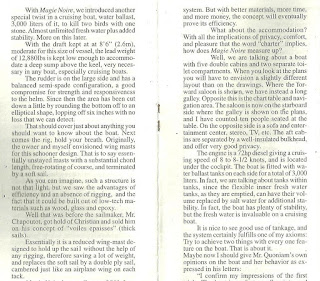 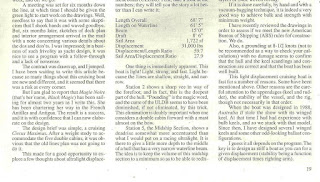 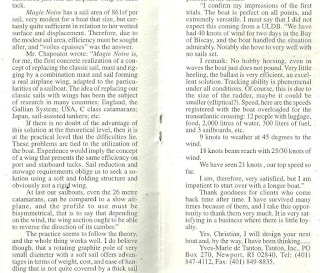 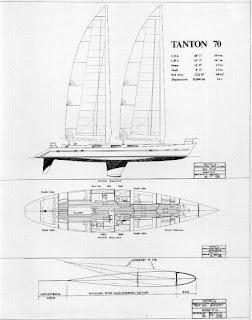 - Now, pursuing the matter came ELIA. Sort of timid approach into incorporating a free standing mast and open wing sail. Sure, we cannot go as far as solid wings for the obvious reason of not being able to lower the sail for reefing and stowage. Also, the elegant way of a turning spar is set up aside, at least for now in an effort to go to a simpler system; the ultimate Elia's goal. The Mark One is a first in this study and with the subsequent models features similar assumptions. A Ketch or Schooner sailplan with identical masts overall length and sails of the same size. As mentioned above the sails rotate around the mast and the wing camber is achieved by articulation placed at a certain distance from the mast. 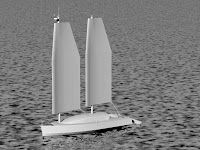 The above pictures show how the problem was approached. The sheets on main and mizzen are the controls to achieve camber. A little simplistic and actually not sure if with the twist can be evenly distributed over the length of the sail. The tapering of the sailcloth not making easier to be properly set. 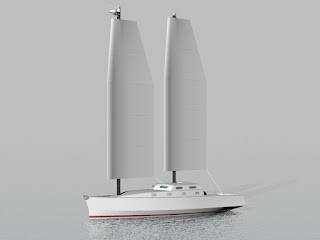 Meantime, the boat changed in shape and details as the project went on. The hull shell now features triple chines instead of two for additional stability. The deck shows a pilothouse for added headroom to accommodate a very tall owner. The Elia Sail System remained the same, until a figured out a solution to the various issues associated in such a trial and error method, until it all comes together. 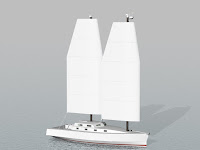 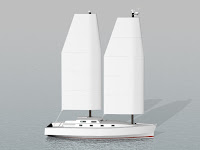 -Maybe I did not explain. Looking at the above renderings, I see a lot of loose ends. No wonder it took so long. Simplification, simplification makes it hard. Alright, straighten lines, duplicate forms and pieces; making sense? This is the latest version, please feel free to ask question and to offer solutions.

-There are even more questions I suppose when you see the bottom of this boat; below the waterline. The variable wings in the sail plan are in tandem with the variable geometry down below. A choice between 2 configurations. 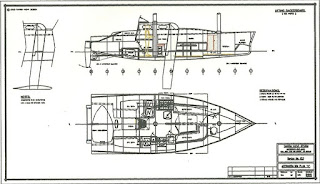 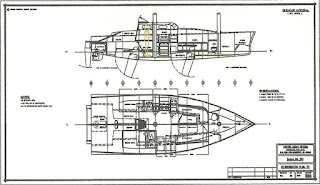 Posted by Tanton Yacht Designs at 1:59 AM