In the Golden age of Ocean Racing. 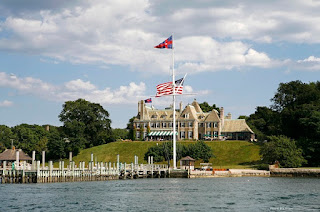 - Last night at the Harbour Court New York Yacht Club in Newport Rhode Island, we had a special evening with a guest speaker who had an extreme influence as a Yacht Designer for the rest of my life. Notably, Richard E. Carter is known as Dick Carter who came to shake the world of Yacht Design, Offshore Racing, and Yachting Rules.

- Starting in 1965 when he startled the sailing world by winning the Fastnet Race in England with a boat of his design, the first one ever, had her built and skippered to this stupendous victory.

- The promotion was for the Introduction of his book; "Dick carter Yacht Designer. In the Golden Age of Offshore Racing". I am glad that a couple of years ago, I suggested for him to write a book about that unique area covering a period of 10 years, where the world discovered his talent, his boats and the legacy of it to all of us at the time, and now in the future through literature about his own lifetime. 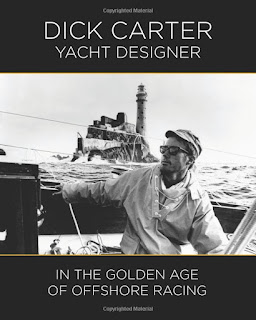 - In the Arcadia Hall Dick Carter, now 90 years old gave us a slide show. For over one hour, he covered his early involvement with racing, to his first design Rabbit and onto Vendredi 13, the 128' singlehanded 3 masted schooner. It would be at least another hour to cover the rest of the story. Maybe a sequel is in order. But the book covers it all.

- Dinner followed and seating next to Dick and Sandy Weld whom I had never met before was a thrill.

- Now, a few observations about the book.

-Dick Carter with his yacht design was clearly influenced by his experiences with small boats, particularly in the International 14 Class, the thoroughbred dinghy of the time.

- The International competition opened his views to the European theater, which became the source for his Offshore racing sailboat success. To these days Carter is considered an icon for yacht design in Europe.

-His very first design Rabbit, inspired by his youthful racing days, showed an understanding of sailing upright and fast. Dick gets is long-distance racing from the Medalist, a Tripp design with American features due to the CCA handicap rules. Rabbit got a bigger beam compared to European models designed under the R.O.R.C rules. His understanding of drag let him offer to the sea less frontal areas below the water, streamlining appendages and separating the keel from the rudder. The mast and rigging benefited from the same treatment and attention to the windage effect. The theme for all his subsequent boat designs: if the water does not see it, the boat will go faster through it.

-His second boat Tina was a revelation to us all, dabbling in yacht design at the time of the 1966 One Ton Cup. Her motion, her look and the beautiful shape were the features we all wanted to imitate in the future. But it took a while for me to get there; Dick Carter was well ahead in the game. With 13 different designers, the race in Denmark signified for many of them that the competition was over, never recovering from L'Enfant terrible.

-I noticed that several times the word "crisp" is pronounced in the book, and that is true. I vividly remember when drawing the Lines Plan, Dick would be poring over the drafting table and murmuring; " keep it crisp Yves-Marie".

- His involvement with the International Offshore Rule came with Olin Stephens, on this side of the Atlantic to devise a union between the English R.O.R.C and the American C.C.A. The result: Creation of a new International handicap system for sailboat racing; the I.O.R .

-For Dick Carter, the vision was for boats to go offshore. No day-sailers, no sport boats, but real sailboats that were to be made comfortable, as much as possible. If the later notion got to be diluted over the years, I think it was one of his regrets. But his work contributed to a new world and for the Carter Offshore organization to spread with the production of boats around the Globe.

- One point in the book that I raised myself a few years ago, is the influence of Lowell North's sails, in particular, being the wardrobe that you had to have. Such a revelation came upon the purchase of a single sail aboard Raoul Gardini's 44' Naif. At Carter Offshore, with so many boats built all over the place, we had an array of different sailmakers for the customers to choose from. Then came North with a shrewd approach to extend his Brand by literally pushing young talented designers: Doug Peterson, Ron Holland, Ed Dubois, to name a few. Like I said you can follow this point on this Blog:
tantonyachtdesign.blogspot.com Search: Porto Cervo 2013.
Posted by Tanton Yacht Designs at 8:12 PM